Apr 2, 2020
RustPython Blog
Introduction to the RustPython parser
Create an issue if you see something wrong. Edit posts or create new ones via PR on github.com/RustPython/rustpython.github.io

This post goes over the RustPython parser. You can see the source code at RustPython/parser/.

When you write code in Python and run it, an interpreter, such as the RustPython interpreter, acts as the translator between you and your machine.

The interpreter has the job of turning your human code into bytecode that a Python virtual machine can run. Bytecode is an intermediate code between source code and machine code. This makes it portable across multiple hardware and operating systems. Bytecode “works” as long as you implement a virtual machine (vm) that can run it. There is a performance penalty for this flexibility. RustPython has a vm under RustPython/vm/. Other posts will go into the details of that vm but now let’s figure out how to turn code into bytecode. 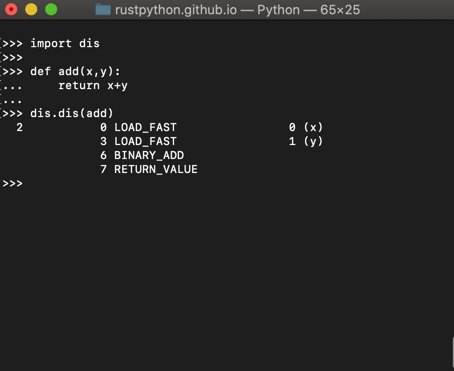 How RustPython turns your code into bytecode

Here are the main steps that RustPython currently goes through:

This list of steps introduces some new concepts like: tokens and abstract syntax trees. We’ll explain and demistify those.

The fastest way to understand what tokens are, is to see them. Conveniently, Python comes with a tokenizer. Here is what happens if I run the tokenizer on the function that I created above.

file.py has the function that I used in the previous example.

A picture IS worth a thousand words 😛 Those are the tokens. They are the basic “units” of the programming language. They are the keywords and operators that you typed. Even new lines and identation count.

If you want to sound fancy:

Here is the link to the RustPython lexer.

If you want to dive into the details of lexical analysis, check out Python in a nutshell / Lexical structure

Step 2 : determine if the tokens are valid syntax

In the previous step, if you add random stuff to your function and tokenize it, it will work and still tokenize. 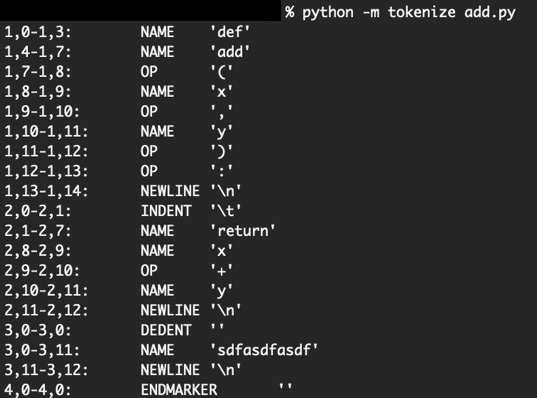 To determine if the tokens are valid syntax, first you need a definition of what a valid syntax is. Python has a defined “grammar” or set of rules. The official reference is on this link. There, you will find a machine readable file. You may read a book to know the rules of Python, but words are too “fluffy”, an algorithm that verifies if the rules are followed needs a very strict set of rules encoded in a file. This video explains the Python grammar and the file’s notation. As the presenter puts it, this is the spirit of the beast (Python) and it is only ~10KB 😭 (compare that to the size of the Python books you had to read!)

Sure enough, there is a whole Rust framework called LALRPOP. It takes the tokens generated by the lexer, verifies the syntax and turns the tokens into an AST (Abstract Syntax Tree). More information and a tutorial can be found in the LALRPOP book.

RustPython does one nice extra thing on top of LALRPOP. It masks the errors and provides you with safer, nicer errors. You can see the code for this in RustPython/parser/src/error.rs

Using RustPython to generate an AST

As a recap, when you write a line of Python code and “run it”, here is what the RustPython interpreter does:

INPUT: your code (in file.py or interactive shell)
⬇️ parse the line of source code into tokens
⬇️ determine if the tokens are valid syntax
⬇️ create an Abstract Syntax Tree (AST)
⬇️ compile the AST into bytecode
OUTPUT: bytecode (in __pycache__/file.pyc or in memory)

The compiler is under RustPython/compiler. Keep an eye on the blog for a future post about the details or the compiler. In the meantime, check out the parser source code in RustPython/parser/.